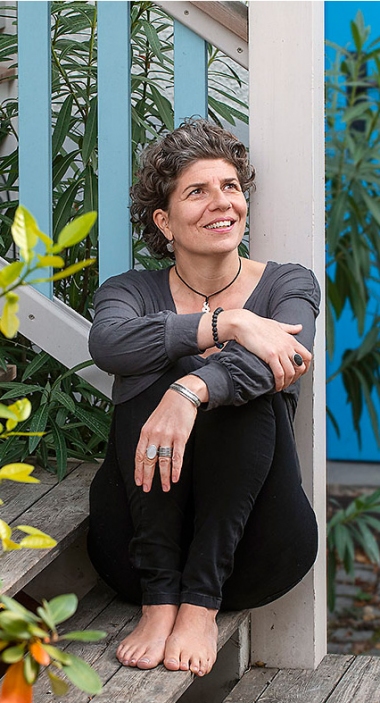 I was born in Zurich in 1974 and began my professional life as a Typographer.  After completing training in various areas, at age 25,  I began working independently as a Graphic Designer and worked until 2013 in my own studio.

Because I suffered severe back pain, I began to practice Yoga when I was about 18.  Sadly Yoga did not help, in fact things worsened!

I first met Ales Urbanczik in 1999.  He did my first 10 sessions of Structural Integration!  I can remember his word so well:  “Yes... We absolutely must work on your feet...”  I thought this can’t possibly be true.  After all, I have back pain.

I was so taken with the fact that I could work upon my own body by myself that I began to  practice RolfYoga intensively.  After a few years, I began to teach Yoga.  In 2014, I travelled to the United States with my family to be formally trained in Structural Integration.  I attended the Guild for Structural Integration, working under Amber Leigh Burnham in Salt Lake City UT, and then under Emmet Hutchins in Kauai HI.  I attended several workshops led by Neal Powers. In 2018 I successfully completed my advanced training in Prague taught by Neal Powers and Aleš Urbanczik. In December 2014, I began my practice in Wilchingen, where I also teach RolfYoga and where I reside with my husband Cosmas and my children Nalu and Miro.