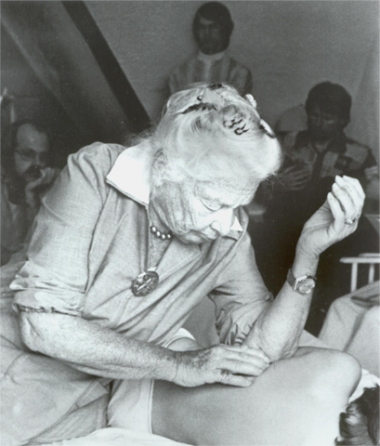 Ida Pauline Rolf (1896 - 1979) grew up in New York City.  She studied Biochemistry at Columbia University.   When she earned her doctorate in 1920, she was one of the first women to be awarded the degree.  She subsequently worked at the Rockefeller Institute, initially in the field of Chemotherapy, then later in Organic Chemistry.  She also studied Mathematics and Nuclear Physics in Zurich, and Homeopathy in Geneva, Switzerland.

She was above all interested in the nature and function of the fascial (connective) tissue, which represented to her the central structural “organ” of the human body.  She became convinced that the structural organization of the body had a far greater impact upon human health and well-being, than was previously believed.

Dissatisfied with the then conventional medical treatments, she began to study Osteopathy, Chiropractic, Yoga, Alexander Technique and Korzybski’s work on “consciousness”.  Initially she practiced primarily upon people suffering chronic illnesses, people who had not found relief anywhere else.  In the 1950’s and 60’s, her treatment successes received such recognition, that Fritz Perls, founder of Gestalt Therapy, invited her to come to the Esalen Institute in California, where Ida Rolf led the first Structural Integration training program.